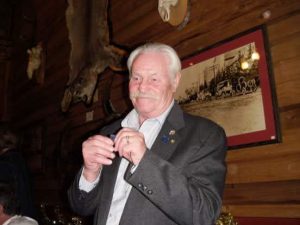 Bill Living in Joseph, Oregon with Debbie his wife, Bill’s life was full.  A real estate broker with an active social life and a thriving company…until Thursday October 24th, 2014 when everything changed forever.

Bill experienced a Lacunar stroke which left him with right side paralysis, impaired vision, loss of speech and difficulty swallowing.  On Friday, Debbie took him to the ER because of symptoms but Bill had been planning a banquet and decided to return home.  On Saturday, they realized things were not getting better.  They called 9-1-1 and at the hospital they were told why he was experiencing all the issues with his body.

On Halloween he was flown to Bend where he had family that could support him and Debbie.  He spent 30 days in in-patient care.  Following release, he and his wife decided it was best if they were to stay in Bend.  They closed their real estate office and moved their things into a relative’s home.  In April they sold their Joseph home and purchased a townhome in Bend.  It was difficult losing their friends and lifestyle.

Though moving to Bend and working to recover from the stroke has been challenging, Bill continues to set goals for himself.  He loves to ride his trike through the neighborhood and is an avid swimmer involved in aquatic therapy.  He has made many new friends and is involved in Stroke Awareness Oregon support groups as is Debbie.  Speech is coming back with much effort as are walking and communication skills.  Bill is a role model to many and will continue lifting others up and helping them on their journeys.